PlanetADnD's general chat area. Post freely in here about all non D&D related topics. Share your daily thoughts, but please keep any profanity to a minimum. *NOTE* ALL religious and/or political topics will be deleted on sight if they are not related to D&D.

I was at Gulf Wars two weeks ago, which is an SCA event held in Mississippi. I had a blast, but the weather was very cold.
A friend and I were walking home from a bardic gathering, and we were passing one of the few permanent structures on-site, which serves food and drinks, so she said: "'Let's go in there and warm up." 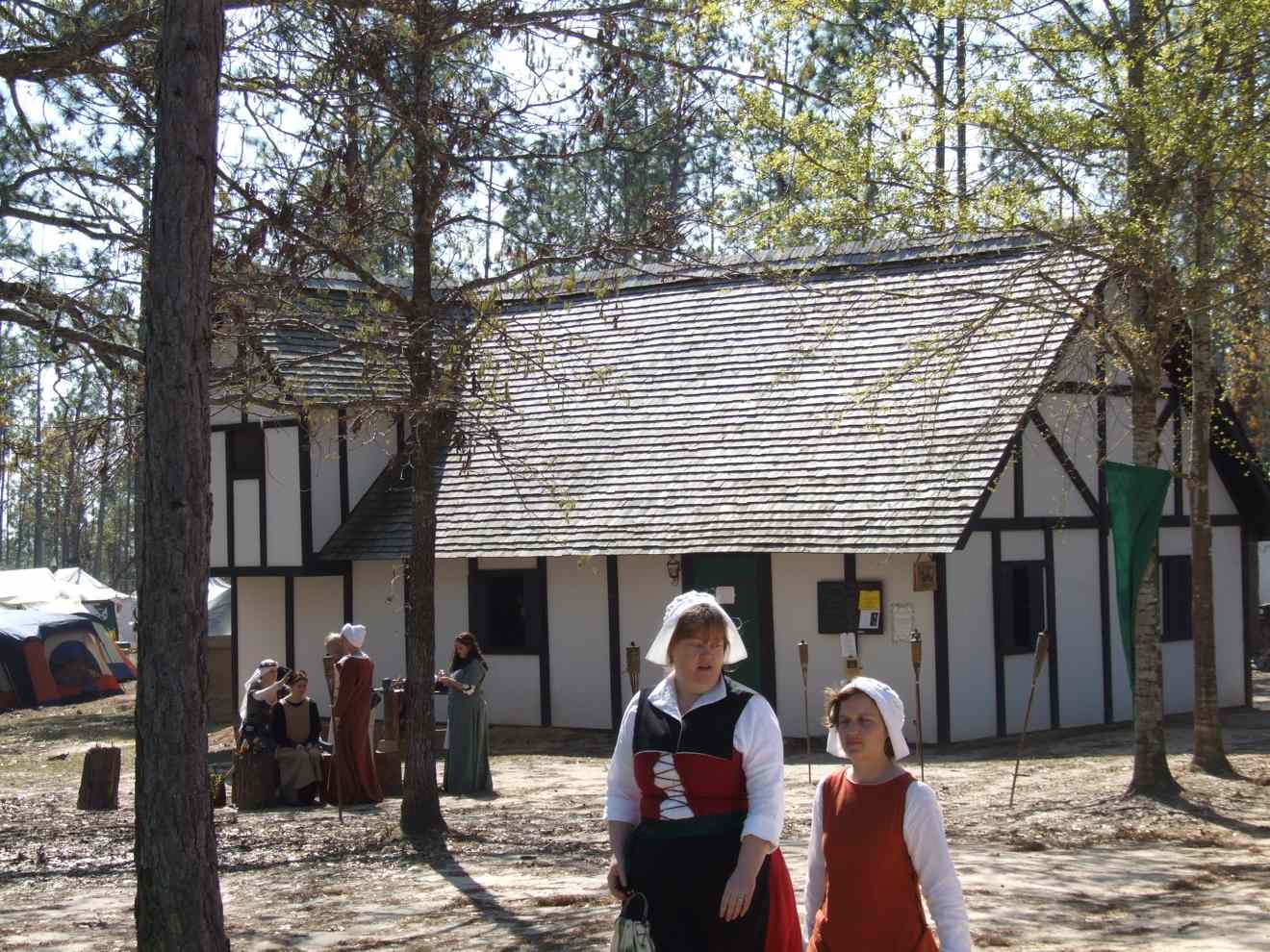 I had no idea what to expect when I opened the door.
It was a tavern.
A straight-up D&D tavern.

I returned to the place several times and every time I was in there I found myself staring at the door, waiting for an elf or dwarf to walk in.
"No matter where you go, there you are."
Top

Holy Holy, you aren't kidding about that place, right down to the torches on the walls! I am assuming they served mead, did they serve any food that would be appropriate for a D&D Tavern, like mutton?
_Matt_
Top

The menu included bread and cheese, mead, beer and wine. There's also a flat top for cooking meat, although there was nothing cooking when I was at that end of the room.

In the middle of the floor - you can just barely see it in the last photo - is a big iron fire pit which has a charcoal fire burning in it. I am still trying to figure out why the place wasn't smokey. It didn't look like a gas fire. I looked to be actual charcoal.

The loft over the bar is used as a stage for the live music they have every night.
"No matter where you go, there you are."
Top

Hah, so they do serve something resembling mutton! Very cool, especially that they have live music every night.
I didn't see it on the photo of the place that you took outside, but did the tavern have a name?
_Matt_
Top

It's called The Green Dragon.
There are several videos of the place on youtube. Search "Gulf Wars Green Dragon"

Here's some video of live music in the loft - the band is called Wolgemut. https://www.youtube.com/watch?v=Wt47eqeLlS8
"No matter where you go, there you are."
Top

Stik wrote:It's called The Green Dragon.
Here's some video of live music in the loft - the band is called Wolgemut. https://www.youtube.com/watch?v=Wt47eqeLlS8

Ha, the Green Dragon?! If the tavern didn't have a name I was going to make a joke about calling it the Green Griffon; you know, after that drawing in the 1E DM's Guide?
Thanks for the upload of Wolgemut. If that's the house band the Green Dragon is doing pretty good. I think the band is probably better to see in person in order to have that heavy drum beat rattle a person's body, and also so a person can clap along. Great stuff.
_Matt_
Top

Wolgemut is a traveling band from Europe. I see them every year at the Pennsic War.

The Green Dragon is only a medieval tavern - which is to say a tavern catering to medieval folk - one week a year, plus whenever the site is used by the SCA. Other than that, it's used by whoever is using the campground. It even doubles for a church when church groups rent the site.
"No matter where you go, there you are."
Top

Well those people with SCA really do a good job of getting the place decked out for your events.
_Matt_
Top
Post Reply
8 posts • Page 1 of 1

Return to “The Tavern”

Users browsing this forum: No registered users and 33 guests